I have been to New York City a number of times now, and each trip just keeps getting better! This was part of our Christmas present from my in-laws, and it was the best gift! It was my sister-in-law and her husband, my in-laws, and my husband, Max, and me!

Y’all know from previous blog posts about my fear of flying. I feel like it has almost gone away! I still take medication, but I think I am getting to the point where I don’t need to! Tip for nervous flyers - I like to fly early in the morning. I’m talking 6am. I know I know, it’s rough. But, I think if I fly sometime in the morning (7am-10:30am), I will already be tired. I am not a morning person, so this is just my personal preference.

We stayed at the Roosevelt Hotel the last few times we have been there. It is affordable and right by Grand Central Station, so you have easy access to the subway/trains to get wherever you want to go! Not to mention, the lobby is beautiful, and they have a great bar area!

When we arrived Thursday morning, it was raining, but that doesn’t stop anyone in NYC, including all the tourists! I was thrown off SO bad this time from the early morning and stress, so I would say it was a pretty low-key day! Ate some pizza (Uncle Paul’s – SO YUMMY AND CHEAP!). We had already gotten super cheap tickets prior to the trip for “My Fair Lady” at Lincoln Center, so we went over there early! We ate at a place called PJ Clarke’s. BEST CRABCAKE SANDWHICH EVER! It had American/Seafood options – and this restaurant was right across the street from Lincoln Center! We both wanted to see this show last time I was there but could not get tickets! It was amazing!! I had never seen a show at Lincoln Center, and it was simply stunning. Not only that, but they had a full orchestra, and we were on the second row. Laura Benanti played Eliza, and she was incredible. I had forgotten how much humor was in the script and how beautiful all the music was! I love seeing classic musicals brought back to life – there is nothing quite like it. 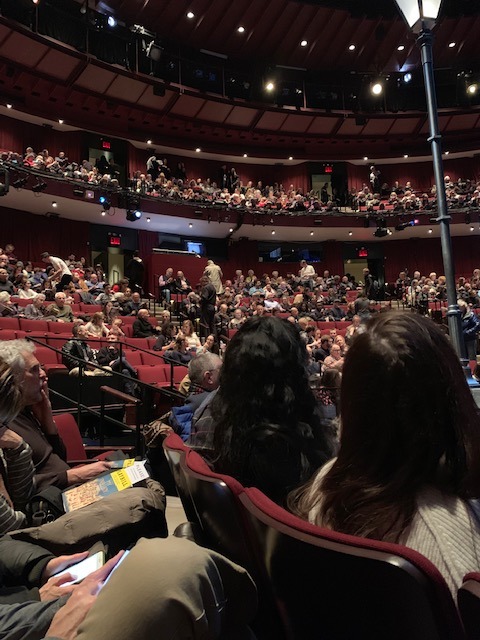 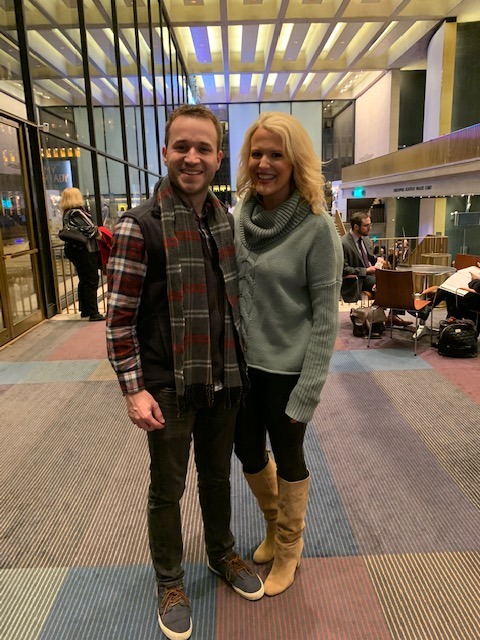 Friday we all went to McSorley’s Old Ale House (East Village)– for some beers & lunch! I am not a big fan of beer myself, but I had their light beer and I LOVED IT. PROMISE. The history in this place was astounding. It was established in 1854, and people like Abraham Lincoln and John Lennon ate in that very place years ago. The pictures, the sawdust on the ground - it felt like a movie! And the food? I’m not joking when I say this is the best fish and chips I have ever had. Lol no joke! If you are interested to read about the full history, check it out here!

Then we went to see Long Island City (LIC) where Max used to live last year while he rented a sublet for 3 months. This is my absolute favorite part of New York - so far, at least! I have seen and done a lot of touristy things and gone through many different neighborhoods. Last year, he stayed right on the water overlooking Manhattan, and the views are just incredible. Despite it being very windy, the view is just breathtaking. It is only 1 stop from Grand Central Station, so it’s also very convenient! It is MUCH quieter in this area and less crowded, so it’s a nice change of pace from Manhattan. We went back and walked all along 5th Avenue, going in shops and, of course, getting PLENTY of steps in! 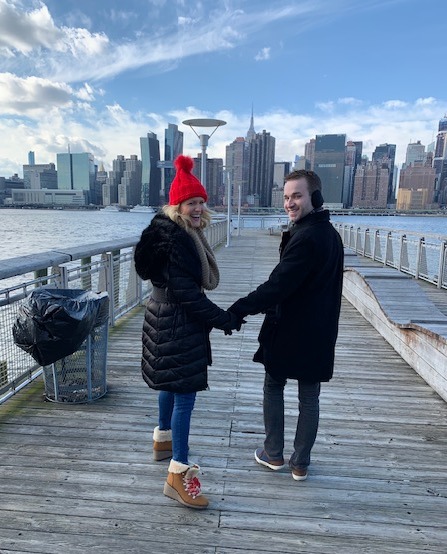 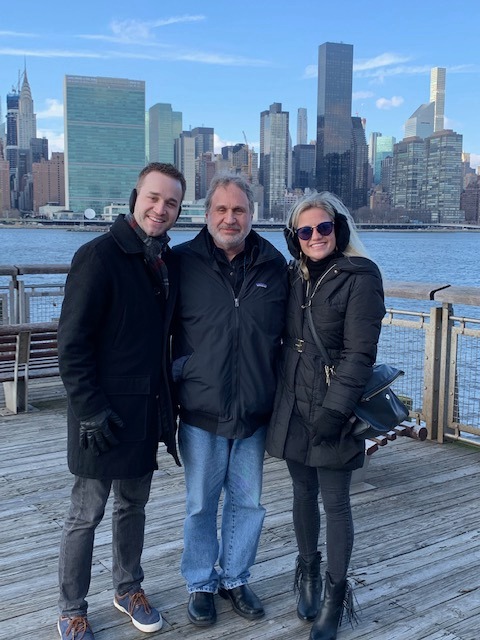 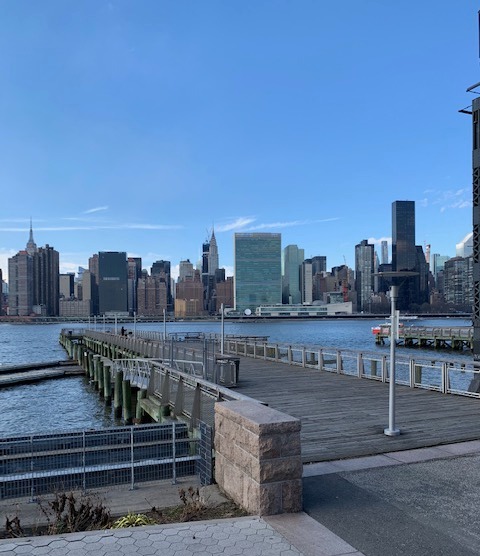 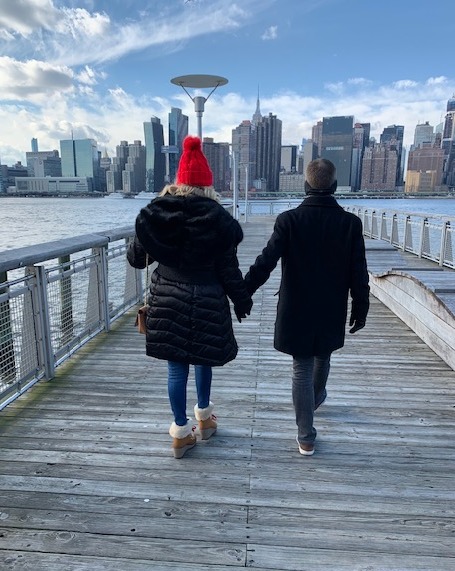 We went to dinner at Stout, an Irish pub, (Grand Central location) to celebrate my father-in-law’s 60th birthday! What a way to celebrate! One of the main reasons for the trip!! 😊 I had the salmon burger. I guess I was really into seafood on this trip, which is a first! This place was hopping!! They have events going on year-round to keep people coming back! More information can be found here.

We decided to get rush tickets for “King Kong - The Musical” that night. Max had already seen it and said the design/graphics were unbelievable, so I was intrigued! I didn’t care for some of the acting/music, but there is nothing like this on the Broadway stage. It takes 12 people just to operate Kong – 3 of them inside! The design elements of this show were truly incredible to see in person!

Saturday, everyone did their own thing! Max and I went and had brunch at a place called Sarabeth’s. This will definitely be on my favorites list! They have multiple locations, but we went to the one in Tribeca - I had never been over in that area, so I wanted to see for myself! BEAUTIFUL AREA! My food was delicious. I am always up for a good brunch (my favorite!), and this did not disappoint. Then we went to Pietro Nolita – a unique pink Italian restaurant! I had seen so many pictures on IG taken there, and I was dying to see it! We didn’t try the food, but when we go back, it is on my short list! It’s also the perfect place for pictures if you ask me! Then we went to the Flour Shop in Soho. Yummy treats, cakes and desserts with rainbows everywhere. Waiting for the day when they will start shipping cakes, because I am drooling just thinking about the cake balls we tried! Other stops: Washington Square Park, Greenwich Village, Magnolia Bakery, Times Square. LOTS of steps this day so I didn’t feel too bad about brunch 😊 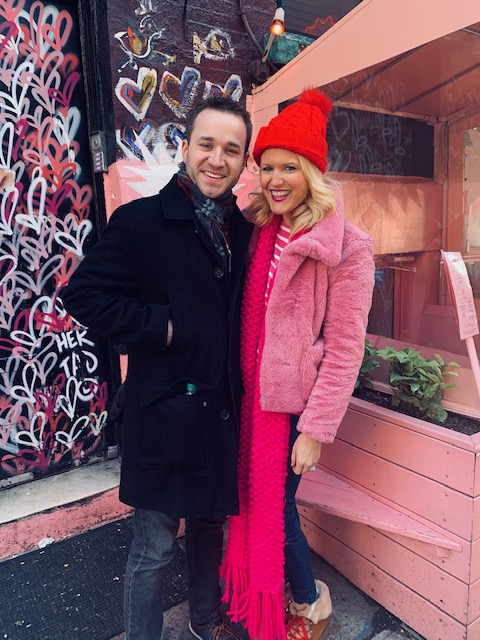 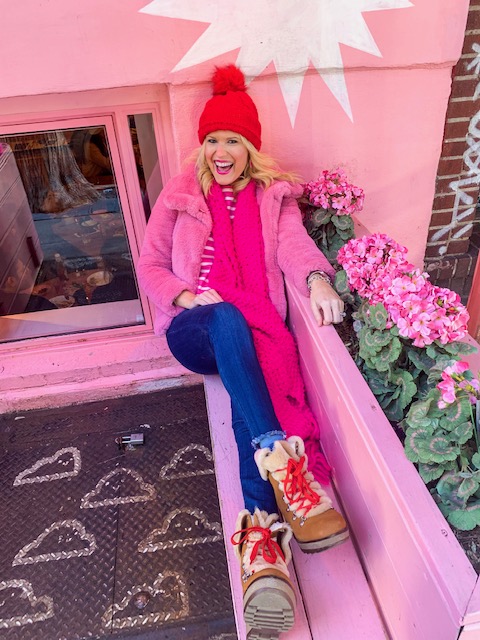 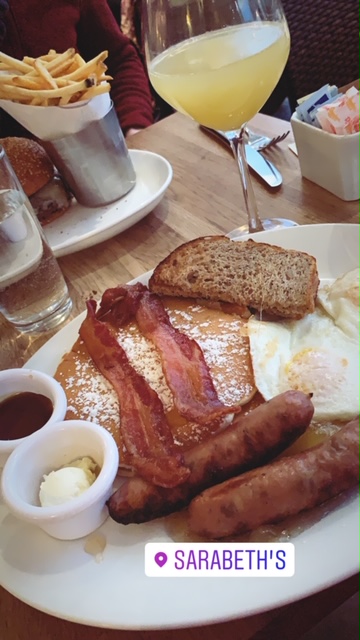 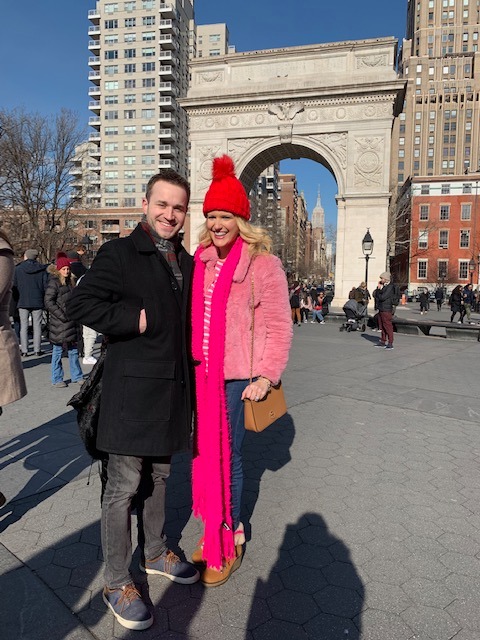 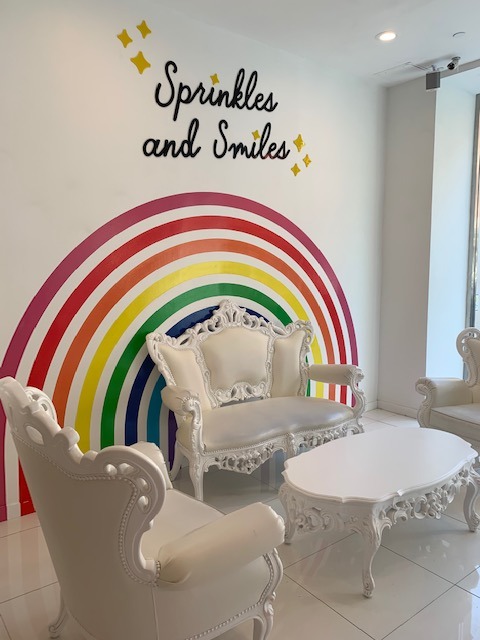 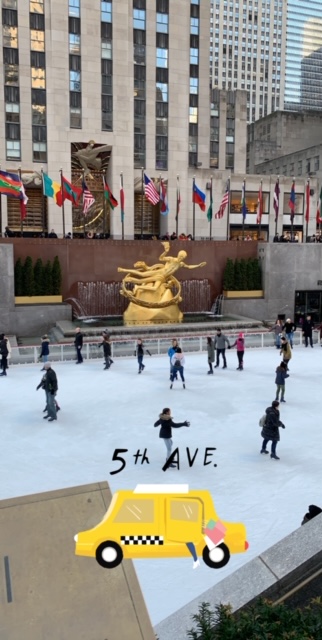 For our last night, we met at The Algonquin Hotel near Times Square to have drinks with the whole family! Not only is this hotel beautiful, but it holds a lot of history. The hotel is best-known for hosting literary and theatrical notables at what is referred to as the Algonquin Round Table. Some of the members included Harpo Marx, Dorothy Parker, Robert Benchley, Robert Sherwood, Franklin Adams, Marc Connelly, and George Kaufman just to name a few! We were lucky enough to get our picture by the Round Table, where members originally met for decades. Side note: the drink I had, The Hamlet, was by far the best drink I had the entire trip! Read more about the history, the cat tradition and the Oak Room here!

We decided last minute to see another show! This time, we both wanted to see something different, so we both went solo to the theatre! Max went to see “The Phantom Of The Opera,” which happened to be the celebration for the 31st Anniversary! That is his absolute favorite show and what inspired him to start doing musical theatre when he was very young, so it holds such a special place in his heart! I went to see a new musical called “The Prom,” and it was so fun, colorful and energetic!! I would recommend either of these shows to someone who is going to NYC!

Unfortunately, we had to leave on Sunday, but we did have time to walk around Central Park and ate lunch at the Plaza Hotel before we had to go to the airport! And then it hit me. I was SO tired. In NYC, you go all day long usually, and I end up feeling very run down by the time I get home! But, it’s always worth it!! I think I am still recovering this week 😊 Friday, you are so close!! 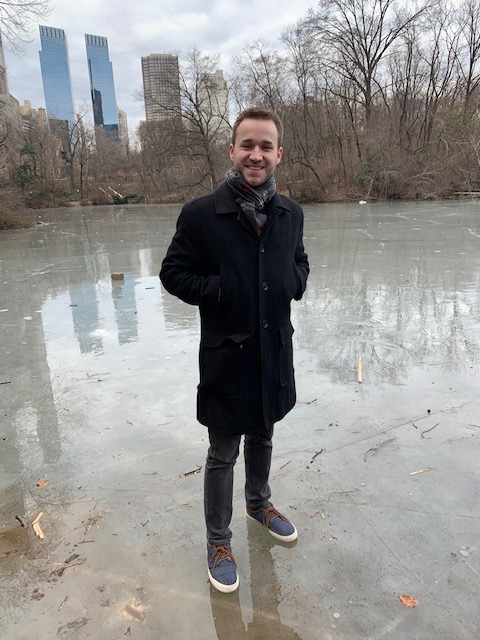 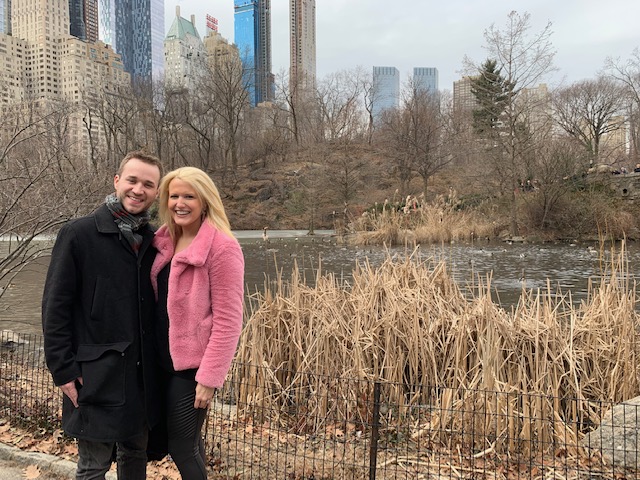 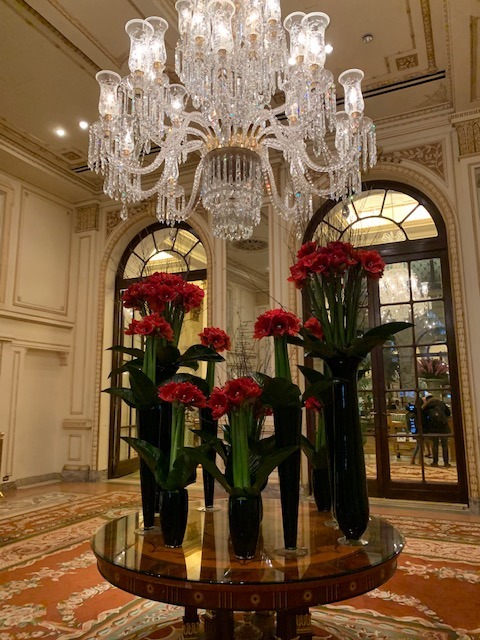 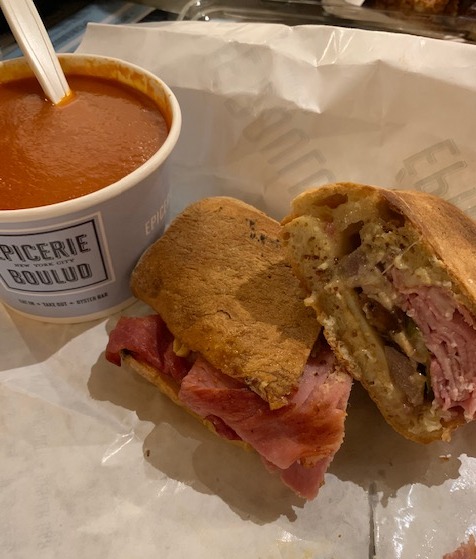 Well, that’s all folks! Thanks for reading along. NYC adventures are always so fun, especially when you are with your family! It was definitely a good way to start out 2019! Now I am just ready for summer!!